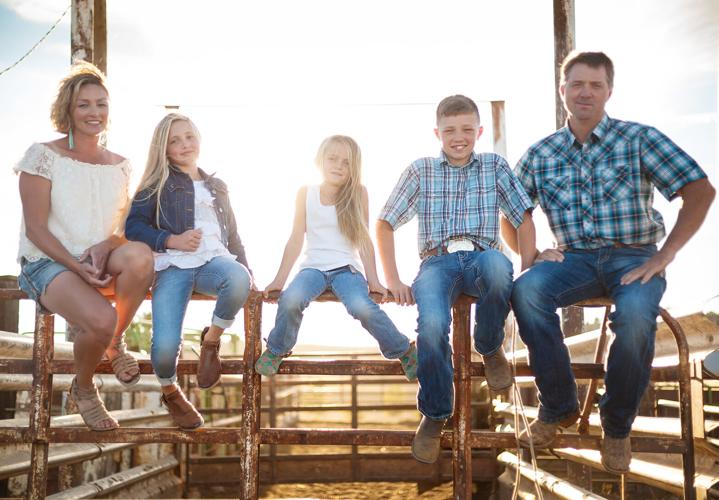 Perfect Balance USA will be the beneficiary of the annual Buckaroo Breakfast at 8 a.m. Saturday, March 26, at the Central Oregon Ag Show. The breakfast will continue as long as supplies last.

McDonald’s is donating the food, and between breakfast proceeds and charitable donations, the Perfect Balance USA nonprofit hopes to gain sufficient funds to continue with their plans.

Started in 2016 by Jeremy and JoHanna Symons of Madras, Perfect Balance is taking a multi-pronged approach to a complicated, dire situation related to the discovery of the endangered Oregon spotted frog along the banks of the Deschutes River, sole water supplier of the area’s farmers and ranchers.

A major effort is educating the public. The Symonses host tours of their operation to educate people about the importance of a common-sense approach to achieving balance between agriculture and government.

Guests are taken on wagon rides around the ranch’s 1,100 acres and the cattle feeding facility to give them an idea of their day — feeding and caring for the animals, growing and harvesting crops, composting manure for use as fertilizer.

“It’s a full-circle operation,” JoHanna Symons said. “The reason we’ve kept giving tours is because we’ve been 100% effective in reconnecting people with where their food comes from and what it takes to produce it. People are positively educated after a visit.

“In addition to large groups of students, we’ve had environmentalists, animal rights activists, and once a group of 48 college professors,” Symons said. “A professor from UC-Berkeley came to us in tears, saying, ‘I feel so bad because I’ve misled thousands of students over the years about the ag industry; I had no idea that small family farms were like this.’

Assuming the average person eats 60 pounds of beef a year for their protein needs, the Symonses raise enough beef to feed about 195,000 people each year.

“Everything is on this earth for a reason,” Symons said. “We need wildlife and all species, but we also must have farmers.

“At some point in your life you’ll need a doctor or an attorney, but three times a day you need a farmer,” she said.

“Keeping the balance where everything thrives is the key. The scale got tipped too far one way and the balance was catastrophically thrown off,” Symons said. “Fish & Wildlife Service got so focused on the water needs of the frog that farmers are now facing bankruptcy because their water allocation has been drastically reduced, for the use of the frog.”

A Habitat Conservation Plan, put into effect last year, requires Jefferson County farmers to release one-third of their stored irrigation water into the Deschutes River for the next seven years.

In year 8, farmers are required to release all their winter storage into the river.

Perfect Balance USA has hired a team of experts to come up with a plan to keep the species thriving but also keep farmers in business. Lake Billy Chinook is being looked at as an alternative water source for Jefferson County farmers.

Asking the Biden administration for water infrastructure money is the only way to get a pumping project of that magnitude off the ground. The downfall, Symons said, is that many farmers won’t be around to see it happen.

The nonprofit is also applying for grants to help in recovery implementation of the frog and hiring a biologist to do unbiased research on the frog.

“This will become a reality if the balance keeps getting thrown off and farmers continue to get forced out of business.”