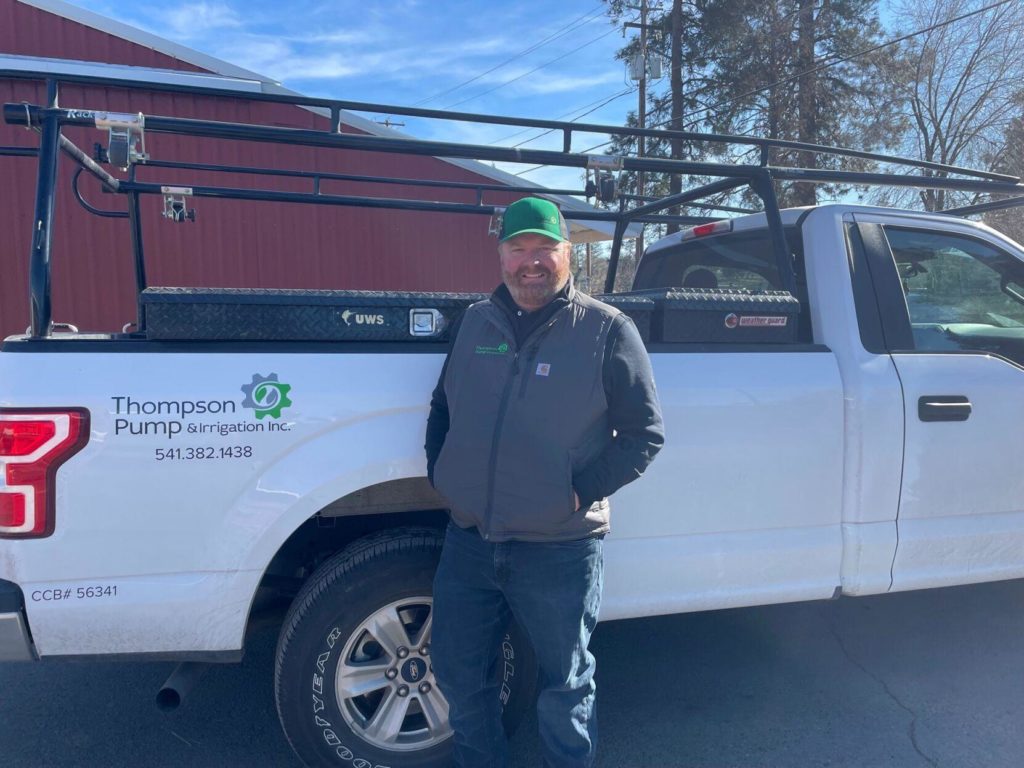 Andy High, owner of Thompson Pump & Irrigation in Bend and Madras, Ore., knows firsthand the perils of farming and ranching where water is scarce.

His grandfather, Taylor High, 97, lives on the remaining 300 acres of the Klamath Falls ranch his family settled in the 1860s, which at one point was nearly 5,000 acres.

As Andy came of age, his father and grandfather told him the water wars weren’t likely to end anytime soon and urged him to go to college.

High earned a degree in public policy and spent the next 15 years working for legislators, including state Sen. Tim Knopp and U.S. Sen. Gordon Smith.

“In 2016 I decided I didn’t necessarily want to farm full-time but to get back in and give back to that community,” High said. “Coming in with Thompson Pumps was a golden opportunity, just a really great company, strong staff and strong community ties in Bend, where my wife Jennifer grew up.”

Ranch life for the High family revolved around hard work, 4-H and socializing at the Midland Grange Hall. Vacations were 4-H Fair Week and the State Grange Convention. His grandfather is one of the oldest living Grange members in the country, with his 85-year pin.

“It’s tough; with all the social media now and so many demands on people’s time there’s not a lot of that kind of community gathering happening anymore,” High said. “…Our ag roots are very important to our family.”

Giving farmers more time is a big motivator for High, who says being able to monitor and control irrigation pivots with a phone is a step in the right direction.

“That’s where our focus is and that’s what excites me about the industry, just the technology helping people,” High said. “We’re a Valley pivot dealer and do a lot of center pivots in Central Oregon. The AgSense products we’ll have on display at the show allow you full access to what’s going on with your machine, wherever you are.”

Soil moisture monitoring provides farmers with a daily report showing where more coverage is needed. The farmer can choose where to slow down or speed up the pivot to equalize water absorption remotely.

“Our goal is to give our farmers and ranchers more time,” High said. “If I can give you another hour in the day that you can go to the football game and not have to run out to a crop, to me that’s a huge victory.

“Within the next year we’ll have a fair amount of drone technology coming to center pivots,” High said. “They’ll be able to fly over your crop daily and within two years you’ll be getting down to which plants are struggling and be able to inject fertilizer from the center point to that section and then shut it off and continue going over other sections.

“Technology in farming is coming,” he said. “There are 7 billion people to feed and a small group that’s doing it.”

Such technology will allow farmers in Jefferson County, who must order water when they need it, to track the areas that still have water at the top level and plan how to stretch what they have.

“They may be able put off ordering water for another 6-7 days which, if you compound that over a season, can mean getting a second, third or fourth cutting, in some cases,” High said.

This spring’s addition of a third Thompson Irrigation & Pump location in Powell Butte has High’s name written all over it.