Clint Johnson: Brings out the best in cattle dogs

Clint Johnson: Brings out the best in cattle dogs 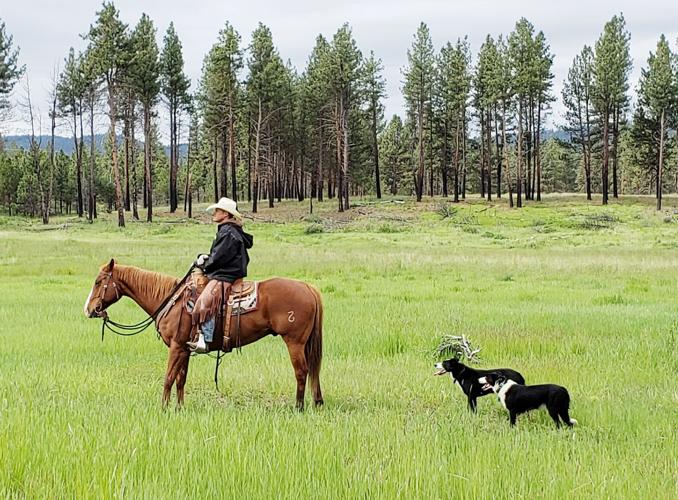 Growing up on a six-generation cattle ranch, Clint Johnson always had dogs around, but it wasn’t until later that he became aware of what ranch dogs can do.

“My mother-in-law Jeanne Warnock had some real cow dogs, border collies that I got to see work and I was very impressed and intrigued and really wanted to get a lot more serious about it,” Johnson said.

“For a long time, many ranchers were pretty anti-dog,” he said. “They’d had hired hands or neighbors that had dogs that weren’t very well trained and could be tough on livestock and weren’t much help.”

Over time, that attitude has changed, he said.

“Working dogs are becoming more prevalent in the West as ranchers are seeing what they can do,” Johnson said. “They’re slowly changing their minds about having them and becoming more willing to shell out a lot of money for them.”

By putting on working dog demonstrations at the Central Oregon Agricultural Show, Johnson hopes to convince more people of their value.

“I’ll set up a little field out there with some obstacles that I’ll put the cattle through and explain how this is useful in an everyday ranching situation,” he said. “You don’t need as much labor which, in today’s market, is extremely hard to find.

“They’re just amazing animals; one well-trained dog can replace four guys on horseback — and the dog never shows up hungover or drunk,” Johnson said. “They show up to work every day, eager to work and are happy to be yelled at.”

Warnock Ranches is operated by Johnson and his wife, Cassi; her parents, Randy and Jeanne Warnock; and siblings Jerod Warnock and Abby Warnock.

Between their locations in Eastern and Central Oregon they run pairs and retain yearlings to place in a feedlot to be sold through a natural beef co-op, Country Natural Beef, that the family helped found.

Dogs are an integral part of their daily operations, with about eight finished dogs helping run some 1,600 head of mother cows and 1,400 yearlings over large expanses of range, meadow and forest. Seven dogs are in various stages of training.

“There are lots of breeds that will do a decent job, but if you Google ‘smartest dog in the world’ the border collie comes up,” Johnson said. “Besides being extremely intelligent, they’re extremely eager to please, whereas Jack Russells, for example, are very smart dogs but they’re also eager to get away with doing things you don’t want them to.”